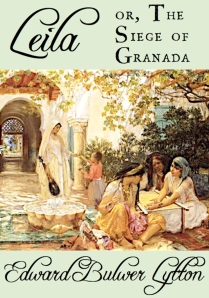 Leila, or The Siege of Granada by Edward Bulwer Lytton

From the same pen that brought us The Last Days of Pompeii and such unforgettable phrases as “the great unwashed,” “pursuit of the almighty dollar,” “the pen is mightier than the sword,” and the famous opening line “It was a dark and stormy night,” come these two feverishly romantic stories set in Golden Age Spain. Lytton was giving the public what it wanted and lived a life of renown, praise, riches, and some ribbing because of it.

Both books are well researched. While reading Edward Bulwer Lytton feels like a guilty pleasure, you might learn something, too.

Leila, Or The Siege of Granada takes place in late 1491, on the eve of the fall of the last Moorish stronghold in Spain, Granada. See the courtly intrigue and mighty battles from both sides — but mostly from the side of the defeated. It’s the side favored by the romantics, anyway. Witness Boabdil’s courageous last stand, and be there with him when he heaves the “last sigh” that is still commemorated at a vista toward the Alhambra today.

Calderon the Courtier tells the shorter tale of a forbidden love, deception, and betrayal at the court of King Felipe III.

This well-formatted edition includes an interactive table of contents and several explanatory footnotes from the first edition. Many original spelling errors have been corrected. This is, hands down, the cleanest edition of these works available.

Get these two amazing bargains in one volume in Kindle or in Nook.