The Best Short Stories Chosen in 1914 by the Most Prominent Authors of the Day (3 Vols.)

Have you read the 50 best short stories of all time?

Rook’s Page Publishing is here to make it easy to meet that goal! This three-volume set in ebook and softcover formats commemorates the hundredth anniversary of a critical moment in the history of literature.

In 1914, the New York Times asked the most highly regarded authors of the day to name the best short story in the English language. Many of their responses have maintained consistent fame through time. Others have become hidden gems. All are essential literary experiences that will make you love to read again.

These masterpieces are collected here for the first time, masterfully copyedited and with an introduction by Martin Hill Ortiz, PhD. 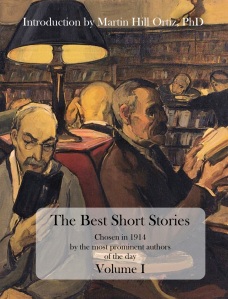 Volume I includes:
An Introduction to the Times survey and the stories
A Lodging for the Night—A Story of Francis Villon by Robert Louis Stevenson
The Outcasts of Poker Flat by Bret Harte
Heart of Darkness by Joseph Conrad
The Man Who Would Be King by Rudyard Kipling
A Christmas Carol by Charles Dickens
The Pavilion on the Links by Robert Louis Stevenson
The Maltese Cat by Rudyard Kipling
The Murders in the Rue Morgue by Edgar Allan Poe
The Purloined Letter by Edgar Allan Poe
Will o’ the Mill by Robert Louis Stevenson
Wolfert Webber; or, Golden Dreams by Washington Irving
The Ring of Thoth by Arthur Conan Doyle
The Celebrated Jumping Frog of Calaveras County by Mark Twain
The Door in the Wall by H. G. Wells
Gifts of Oblivion by Dorothy Canfield

Volume I is available on ebook:

On Kindle in the USA, Canada, UK, Australia, India, and Japan

In the USA, the UK, and Europe for Nook

and in softcover (more than 500 pages!) at Amazon | CreateSpace | Barnes and Noble | your favorite indie bookstore | request it at your library!

Volume II includes:
Introduction
Markheim by Robert Louis Stevenson
Strange Case of Dr. Jekyll and Mr. Hyde by Robert Louis Stevenson
The Luck of Roaring Camp by Bret Harte
The Brushwood Boy by Rudyard Kipling
Doctor Marigold by Charles Dickens
Rip Van Winkle by Washington Irving
An Unfinished Story by O. Henry
The Claws of the Tiger by Gouverneur Morris IV
The Fall of the House of Usher by Edgar Allan Poe
Providence and the Guitar by Robert Louis Stevenson
Bread Upon the Waters by Rudyard Kipling
Marjorie Daw by Thomas Bailey Aldrich
Love in a Mist by A. Neil Lyons
His Wife by Stephen French Whitman
Rebecca and Rowena by William Makepeace Thackeray
Master and Man by Leo Tolstoy
The Necklace by Guy de Maupassant
The Piece of String by Guy de Maupassant
Cinderella by the Brothers Grimm
The Story of Ruth Anonymous
“What is the Best Short Story?” The original article as presented in the New York Times

Kindle in the USA, Canada, UK, Australia, Japan, and India

Nook in the USA, the UK, and Europe

and in softcover (almost 500 pages!) at Amazon | CreateSpace | Barnes and Noble | your favorite indie bookstore | request it at your library! 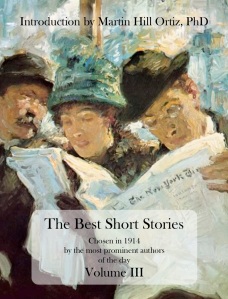 Volume III includes:
Introduction
The Turn of the Screw by Henry James
The Haunted and the Haunters; Or, the House and the Brain by Edward Bulwer-Lytton
A Municipal Report by O. Henry
The Man Without a Country by Edward Everett Hale
The Merry Men by Robert Louis Stevenson
The Gold Bug by Edgar Allan Poe
The Cricket on the Hearth, A Fairy Tale of Home by Charles Dickens
The Story of Richard Doubledick by Charles Dickens
The Belled Buzzard by Irvin S. Cobb
An Incident by Sarah Barnwell Elliott
A Journey by Edith Wharton
Beyond the Pale by Rudyard Kipling
Without Benefit of Clergy by Rudyard Kipling
The Stolen Story by Jesse Lynch Williams
The Dead by James Joyce
Biographies of the Selectors and the Selected Authors

On Kindle in the USA, Canada, UK, Australia, India, and Japan

For Nook for the USA, UK, and Europe.

And on Kobo worldwide.

and in softcover (well over 500 pages!) at Amazon | CreateSpace | Barnes and Noble | your favorite indie bookstore | request it at your library!